Here is her experience:

In November 2012 – I was experiencing cold and flu like symptoms with runny and blocked nose with sometimes a small nose bleed.

In December 2012 – I visited the GP who sent me for a CT scan to investigate what was causing the blocked and bleeding nose. The report came back that I had polyps so the GP referred me to the ENT Team at the John Hunter Hospital in Newcastle.  Boxing Day I experienced a very bad nose bleed and returned to the GP who referred me urgently to see the ENT Specialist at the John Hunter Hospital.

In January 2013 – By the time my appointment came around in mid January the growth in my nose had grown and was beginning to obstruct my breathing. At this appointment Dr Monique Parkin’s team performed a biopsy on the growth to determine what it was. At this stage I was totally unaware it would be anything sinister. They then had to perform a second biopsy because the first one came back inconclusive. The second biopsy performed confirmed that the growth was an SCC. From here it all became a quick roller coaster.

In February 2013 – After having a CT, MRI and PET scan I received a call from Dr Monique Parkin that she had referred me to an ENT Surgeon in Sydney Dr Ananda and I was also referred to the Cancer Center at the Mater Hospital in Newcastle under a team of doctors. Here after their meeting they advised me that I would need major surgery which involved removing my eye, cheek, some tissue from the nose and that this would be grafted by skin from my thigh. A prosthetic eye may be possible in the near future. But for the time being I would lose half of my face. This was on the Tuesday I was notified they had a spot for surgery the following Monday and that I needed to make a decision as soon as possible. With the thought of losing half of my face I told my family I didn’t want to have the surgery. The initial thought going to Sydney scared me but after receiving this news at the Mater Hospital in Newcastle I thought it was worth a chance getting a second opinion. So I denied the offer for surgery and went to Sydney.

On visiting Dr Ananda he advised me that I didn’t need the drastic surgery that I had previously been advised on. He thought he could resect the tumour endoscopically and save my face and probably my eye. With this very hopeful advice I decided to go ahead with surgery in Sydney followed by my treatment in Newcastle. After visiting numerous doctors in Dr Ananda’s team I had surgery booked for the 1st of March 2013 at Royal Prince Alfred Hospital.

My surgery went for an unexpected 12 hours to remove the tumour. They used an ancient technique performing a flap technique, which preserved my face and eye. To do this though they couldn’t get clear margins on the tumour and removed my cribriform plate as the tumour had started to invade this area too.

During my recovery in Royal Prince Alfred Hospital I experienced a CSF leak from the initial surgery and had to have a second surgery to redo the graft.

At the end of March I visited the Mater Hospital to receive my surgery results plan for chemotherapy and radiation. Here I was told the initial diagnosis of an SCC tumour was incorrect and the results had come back that in fact the tumour was a stage 4 SNUC a very rare aggressive form of cancer. The radiologist I saw at the Mater Hospital in Newcastle didn’t have a protocol for treatment, could not give me much information about the type of cancer I had nor could they even give me a date of when my treatment would start, they just told me they would be in touch and that treatment would possibly start in a month due to long waiting lists. Feeling very anxious and unsure I called Dr Kerwyn Foo the Radiation Oncologist at Royal Prince Alfred Hospital. I asked his opinion on what I should do as I was very scared. He advised to come to Sydney, that they had treated a few cases with the same type of cancer and that they had a protocol for treatment already in place.

As a result from the fantastic surgery and care that I received from Dr Ananda and his team, visually I have minimal scaring on my face and to date have maintained my pre surgery level of vision.

Words do not describe how very grateful I am for the work Dr Ananda and his team have performed to save the appearance of my face and my life. 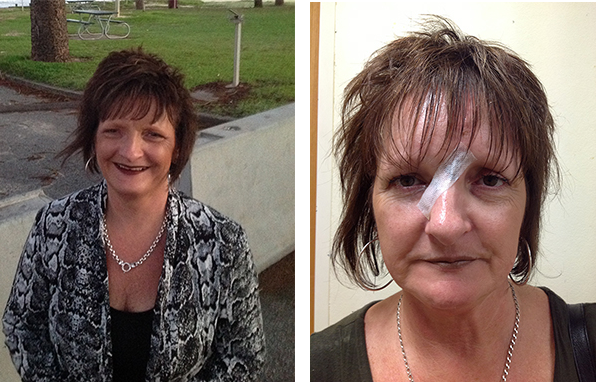